We are just out of the gate for the Evergreen Mayor’s race and Awesome (the dog) is already picking endorsements from powerful politicians across the globe.

You can donate to Foothills Animal Shelter right here

FOR IMMEDIATE RELEASE: 2020-01-12 12:48PM MST:  A very powerful player in Ohio politics, Bimmer (the dog), and his owner that is also in politics, John T. Plecnik have officially released a statement endorsing the Evergreen Mayor front runner, Awesome (the dog). Awesome is very pleased to have the endorsement of such great and wonderful citizens like Bimmer and John. This just goes to show that Awesome is the perfect dog for the job of representing Evergreen, CO.  Please follow Awesome for Evergreen Mayor on Facebook 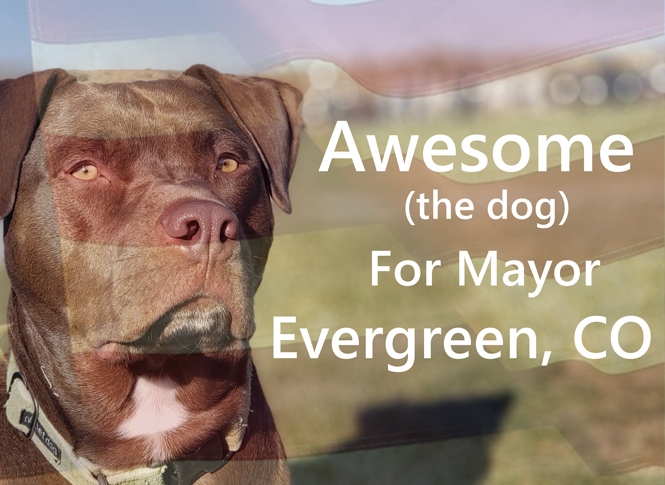 About John T. Plecnik and Bimmer

John was elected as Willoughby Hills Councilman-at-Large on November 5th, 2013, and twice re-elected him, each and every time, as the top vote-getter in all contested races for elected office in Willoughby Hills.  That is why Council President Nancy Fellows and so many others say John is “the favorite son of Willoughby Hills”!  Council voted to appoint John as Vice President of Council and Chair of Finance in his second term, and unanimously re-elected him as Vice President and Chair of Finance.  In his three terms and six years on Council, John served on every single Committee of Council, balanced the budget, CUT taxes and reduced the City debt by nearly half.  Lake County Commissioner John Hamercheck highlights two accomplishments as John’s greatest on Council:  John drafted responsible contracting legislation, which became the template for all of Lake County; and John negotiated and authored the tax abatement which brought Produce Packaging, Inc., and over 300 good-paying jobs to Willoughby Hills and Lake County.  Councilman John Plecnik retired undefeated in 2019 to run for State Central Committee.
Law Professor
John serves as an Associate Professor of Law with Tenure at the Cleveland-Marshall College of Law at Cleveland State University, where he teaches Tax I; Tax Procedure, Penalties & Crimes; Wealth Transfer Tax; and Estates & Trusts.  Prior to his current post, John served as an Adjunct Professor of Law at Georgetown University Law Center, where he taught Tax Penalties & Tax Crimes.

2020 Evergreen Mayor Race is going to be a long and hard fought battle. One that only the big dogs last through. EAPL is expecting this to be a great fundraising event and